Over the last eight months, the UC Arts Digital Lab has been lucky to have student Dan Bartlett working in the office as part of the Voices Against War project. Dan came on-board as part of the Summer Scholarship programme to help gather, describe, and prepare material for the project and has quickly became a source of wisdom and humour in the office. Unfortunately for us, others have spotted his talents and he begins his next journey this week at Te Rūnanga o Ngāi Tahu, working on their World War I website. Before he left, Lucy-Jane took the time to sit down and talk to him about his work on Voices Against War and his experiences in the Digital Lab. 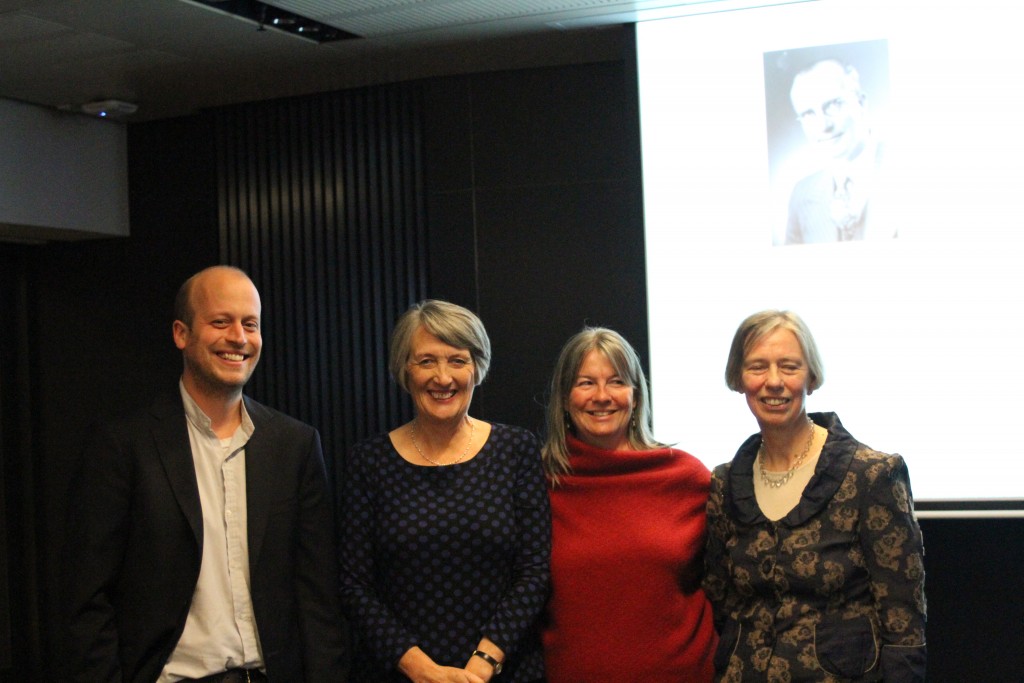 Dan Bartlett and the rest of the Voices Against War team

Tell us about the Voices Against War website
Ok. Well, Voices Against War is a website about pacifists, conscientious objectors, and seditious Cantabrians in the First World War. They were speaking out against, first: compulsory military training, and second: conscription. And quite a few of them got sent to gaol for their views, either for speaking out, which was sedition, or for refusing to go when they were conscripted, and that was conscientious objection. The website is telling the stories of quite a few different men, women and their families that were involved in that movement.

Great. And what are you studying?
I’m currently studying Honours in History. New Zealand history is a particular passion of mine. I’ve been really interested lately in reforms in the 90’s under the National government, from the 1991 budget, in terms of welfare and health and how it affected people – closing down hospitals, things like that. I’m particularly interested in history when you can use it to see how it affected people and how we could learn lessons from it and not do it instead.

What have you learned working in the UC Arts Digital Lab?
Well I didn’t really have digital skills! I came to the project with research and writing skills and not, for example, the ability to upload to a website. And I’ve learnt about metadata, and how websites work. You showed me the matrix code behind things {laughs} *Editor note: He means HTML* I have way more of an understanding than I had before.

So digital archiving of information and all those things that go along with it?
Yeah, like copyright; how to accurately describe things; metadata.

And terms like ‘metadata’ you probably hadn’t come across before?
Yeah, no, I hadn’t. I might have seen it but I didn’t know what it was called.

So what is metadata (for those who don’t know)?
It’s all the data that’s extra from the item or file itself, I guess. Like the date; type of image; rights, who it came from; who gave it to the archive. So I guess it’s the holistic version of saying, “This is so-and-so in 1918.”

I always think of it like bibliographical data – data that explains the origins of…
Provenance. Yeah. But also how to find it, if you want to find it and use it for research.

Would you see yourself now as a Digital Humanist?
It’s definitely going that way. I’d hope to develop more skills. So I applied for this job with Ngāi Tahu which is going to be doing the same work – the research and writing – for their World War I website, which will be looking at Ngāi Tahu soldiers. And I think the main reason I got the job was because I have those website skills.

What I think is interesting, and what you’ve sort of talked about before, is you’ve never really taken to the digital. You’ve gone into this role, but really the role is highly focussed on the historic passions that you have. The digital is just a way for you to get there.
Yeah and I’ve discovered that using digital platforms is a really good democratic way to do public history. It’s a way to get information out there that’s more than just at one museum in a physical place in Christchurch, for example. One of the descendants’ families, they’re all over the world, and they are able to access this website and look at their Grandfather and Great-Grandfather’s profile that we’ve put up because it is digital. And I wouldn’t have really thought about it before. It’s made me appreciate websites such as Te Ara a whole lot more.

And I think you understand a little bit more about the work that goes into creating those resources. As a student I was just like, “These resources exist!”
“Thanks!” Yeah, but it takes heaps.

So would you encourage other students to take DIGI papers or to work in the lab?
Yes, definitely. It’s funny – I think I told you, but I had a couple of appointments in the Library about resources, because I was wanting to use old issues of the Times and the Guardian for British history because I was looking at the miners’ strike. And they sent me this thing saying, “You might be interested in this Digital Humanities.” But it was really quite foreign to me. I was like, “That sounds really weird!” And now I get it and it’s really helpful.
Even if you were just able to take a DIGI paper as part of your degree, I think that would be really helpful.

I think that a large problem with Digital Humanities is translating what it means to people. Because I think the term in itself is not very clear. A lot of people point out that there is no ‘Digital Humanities’, that all of the Humanities should be integrating the digital. And I think the Voices Against War website is a good example of that. The project isn’t successful because of the digital element. It is successful because it is an interesting topic that there aren’t enough resources on and that has real-world applicability. The stories that make up the project are what makes it compelling – the digital element is just what makes it available to people.
Yeah! The stories are driving the project but the digital element provides the tool to share them.

So have you been converted to the digital?
In terms of public history and archiving – yeah, big time. Because we’ve had to use all those resources for Voices Against War, like Papers Past and things like that. They’re just amazing things. But I still don’t want a cell phone or a smart phone. I hope nobody makes me get one because it just stresses me out. So converted in some ways, other ways not so much.

So there you have it – Dan Bartlett, the Digital Humanist without a cell phone. We would like to thank Dan for his work in the office, but also for putting a smile on our faces every day. We know that he will be cherished at Ngāi Tahu and that he has a bright future in public history.