Social Darwinism and The Time Machine.

The Time Machine by H.G. Wells (1895) was written at a revolutionary time in science and sociology. The Time Traveller, a scientist, travels to the year AD 802,701 through using his time machine. H.G. Wells was educated in science, and so upon first glance, one could read The Time Machine as purely science fiction – a science adventure – with little social commentary.

What makes The Time Machine such an influential novella to read critically is the element of social commentary incorporated into the scientific romance text. H.G. Wells manages to present an allegory that argued against a sociological theory that was emerging in the Victorian Era – Social Darwinism. Derived from Darwin’s On the Origin of Species, where the biologist proposed natural selection, Social Darwinism was a theory that applied Darwin’s theory on some individuals of a population having a greater chance of surviving and thus passing on their ‘successful’ genes to their posterity, to human populations. Educated by Darwin’s ‘bulldog’, Thomas Henry Huxley (yes, the grandfather of Brave New World’s Aldous Huxley), Wells was a huge fan of Darwin’s work; T.H. Huxley actually coined the term ‘Darwinism’, so it was a very personal battle Wells was fighting through his allegory. Social Darwinism’s application of natural selection to humanity goes against the very essence of On the Origin of Species, which deems humans to be an artificial population, and thus immune to Darwin’s theories. First proposed by Emile Gautier in 1880 in his article Le Darwinisme social, Gautier proposed Social Darwinism defends the class gap seen in Victorian society resulting from the likes of the industrial revolution. Gautier believed the rich getting richer and the poor getting poorer was merely ‘science’, with some people being more genetically inclined to succeed. Wells rebuts this suggestion entirely. 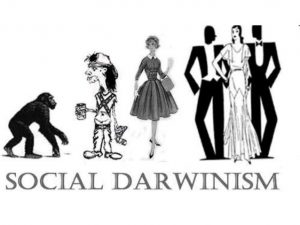 The feeble, lazy, and unintelligent Eloi in the novel represent Victorian society’s ruling class, and with Morlocks representing the working class. Under Social Darwinism, this class gap would have worked well, indefinitely. The Time Traveller’s encounter of the Eloi being hunted by the Morlocks suggests otherwise. The laziness of the Eloi has allowed them to become sitting ducks for the Morlocks; in other words, the intelligentsia of Victorian society have ‘evolved’ so far they have become defenceless, and the working class has revolted and provides a profound risk for the ruling class (throwback to the Russian Revolutions, only two decades after The Time Machine was published).

The Time Machine almost serves as an allegorical warning to the ruling class that defending their classism through Social Darwinism isn’t terribly intelligent, and through striving towards perfection, they’re likely to become Morlock snacks.