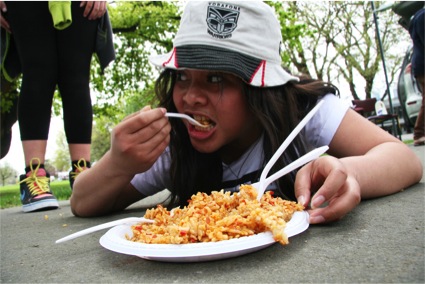 Seven teens sprinted for the spicy rice and two litres of milk in the middle of Christchurch’s Latimer Square.

They were not hungry, so much as eager to win.

The students were among 12 high school teams competing in the city’s own version of the Amazing Race.

Run by the University of Canterbury’s XL group and No Limits from the Christchurch Polytechnic Institute of Technology (CPIT), the race required teams to undertake a challenge at five pit-stops throughout the CBD, including juggling, building card houses, and eating fiery chili rice.

No Limits racer Miroyda Brunt, from Riccarton High School, willingly scoffed chili for teammates who could not stomach the heat.

“I eat a lot of spicy food at home,” she said. “This is the best challenge, because it’s food.”

Welsh is one of the coordinators of XL, a Pacific outreach programme that uses a tutorial system to get Pacific high school students into tertiary education.

“Other programmes have focused on the careers aspect, like bringing in motivational speakers. We use a tutorial method and you’d be surprised how much of a difference that makes,” he said.

“Most of the universities go for the students who are already doing well, but we go for the ones that just need a little bit of extra help.”

No Limits focuses on a performance aspect for Pacific students.

“You can act, sing and dance. Anyone can join,” Miroyda said.