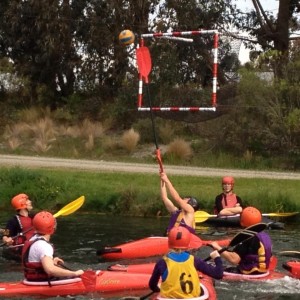 The goalie holds his paddle and eyes the ball with an aggressive stare. Hands gripped tightly, he prepares to launch into action.

“Ten seconds!” someone yells from the rectangular water pitch.

A member of the Burnside team shoots, but does not score. University defender Owain John hits the ball back to the other side of the court.

This is canoe polo. “It’s like netball, but on water,” said Tim Riddell, a member of the University of Canterbury team.

The aim is to shoot a soccer-sized ball into a net suspended above the water at each end of the court.

The players weave their way around the river. Fast, deliberate movements are key.

This week’s match is between University and Burnside High School. It’ s the beginning of the annual summer league competition, a social tournament.

Captain Ed Radcliffe said the game was best described as “a hilarious mess of paddlers and kayakers”.

After 10 minutes the buzzer sounds and it’s half time. Burnside lead 2-0.

Radcliffe plays for fun, but there are others who take the sport seriously.

Owain John, for instance, has been playing for eight years.

John said the best part was pushing people over. But this year the rules were strict – no pushing allowed.

“At elite level the rules aren’t so strict,” he said. “It’s more of a safety measure for this competition.”

It is also ideal for paddlers wanting to improve their skills on the water. Riddell, for instance, is a kayaker at heart.

“It’s a good way to practice rolling and whoopees,” he said.

The summer tournament will run for another five weeks.