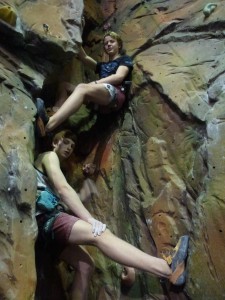 Climbing calls: Josh Cornah, 14, and Nathan Bothamley, 15, are off to New Caledonia next week to represent New Zealand in the under-16 world youth climbing championships.

Josh Cornah of Unlimited School and Nathan Bothamley of Christchurch Boys’ High School are off to New Caledonia to represent New Zealand in the under 16 World Youth Climbing Championships starting on 19 September.

They are the only climbers selected to compete from the South Island.  A total of 13 climbers will represent New Zealand.

The two “good mates” compete against each other.  Josh came first in the under 16 national rock climbing championships and Nathan came second.

They train together for 20 hours every week and are looking forward to their first international competition.

“It’s really good training with Josh because he is a decent amount better than me and that pushes me,” Nathan said. “I would beat him if I could.  I feel like I am catching up.”

Josh has been climbing for five years and Nathan for three.  Both have had finger stress fractures and Nathan is recovering from a broken finger.

A big reason to climb for both the boys was the other people who climbed.

“It is so relaxed and a really fun place to hang out.  We feel comfortable in this group,” they agreed.

Nathan had competed in National events as a swimmer, but left that because rock climbers were just his type of people.

Rock climbing gave them a feeling that they had pushed themselves to accomplish something hard.

They had not received any funding and were working to pay their way.  The Roxx, where they train, were “pretty awesome” and held a clip and climb event to help cover some of their costs.

The Roxx administrator Katie Wolf said both boys were well respected among the staff.

“They are always quick to lend a hand and help clean up,” she said.

“They have trained hard for these competitions and have really deserved this chance to compete”.

After the competition Nathan and Josh will probably “knuckle down to some exams” before heading out to the cave at Sumner for some “pretty good outdoor rock climbing”.

_Krysia Krawczyk for the Christchurch Mail