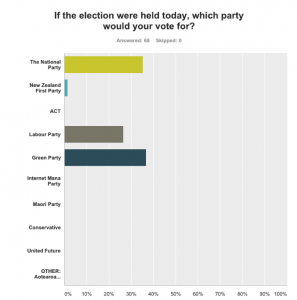 An informal survey of Canterbury University students suggests young people may be more engaged in politics than first thought.

Where electoral statistics state that only 65 percent of those aged 18 to 24 in central Christchurch have so far enrolled to vote, The Record’s survey of 68 students found all but one were enrolled.

UC senior lecturer Dr Babak Bahador, who specialises in media and politics, cautioned that the high percentage of enrolled students was probably due to the fact that politically active people were more likely to participate in surveys than those who weren’t interested in politics.

However, Canterbury University students do appear to be more engaged than other students across the country: Canterbury had the highest voter turnout for students’ association elections this year.

UCSA president Sarah Platt said that in 2011 the UCSA elections had a voter turnout of 19 percent, in 2012 that was 25 percent, and last year it hit a record high of 33.3 percent with 37 candidates.

“So 31 percent with only 23 candidates this year isn’t too shabby,” she said. “It’s important to note most other students’ associations across the country struggled to make it to double digits.”

The most important issue in this election for students was poverty and inequality. One respondent said child poverty was “the starting point for solving many other problems”.

“The way we care for our most vulnerable is the true mark of the morality of our society,” another respondent said.

“Growth is meaningless if the benefit is not experienced by society generally,” said the respondent.

Other issues of importance were the environment, education, and housing.

Bahador said these responses were predictable as there was “a lot of research to suggest younger people tend to vote more left, leaning towards policies around the homeless, the environment and education”.

“As people get older, they become more conservative,” Bahador said 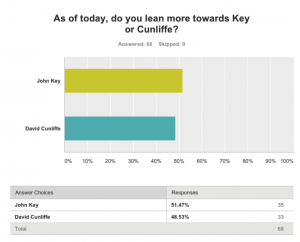 When asked which party they would vote for if the election were held today, the Greens came out on top with 36 percent of the vote.  National followed closely behind with 35 percent and Labour sat at 25 percent.

But David Cunliffe was only a slice away from being the favourite for Prime Minister, recording 49 percent support among respondents to 51 percent for John Key.