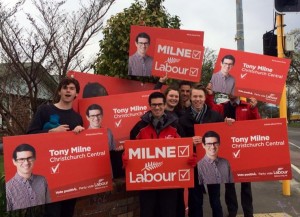 Getting out the vote: Tony Milne and his campaign team.
Photo: Georgia Weaver.

It’s 7.30am in the morning but the Labour candidate for Christchurch Central is bright and cheerful, ready for an hour’s worth of sign waving.

He gets a mixed response from the rush-hour traffic. Some toot and wave in support, others make rude gestures and yell at Milne and his team.

Ever positive, Milne never flinches at any of it.

For Milne it is all about getting his name out there.

“I got two votes by just standing out here the other day.”

Milne recalls a time not long ago when he and his team were sign waving on a corner and National rival Nicky Wagner had to stand amongst them, waiting for the lights to change so she could cross the road.

“She got all flustered,” Milne says with a chuckle. “She ended up crossing to the complete opposite of where she needed to be.”

The group finishes up and heads to Beat Street Café for coffee and breakfast with campaign manager Sarah Epperson to discuss the plan for the day.

It will be much the same as the days before: a couple of hours of door knocking, some interviews, lunch, and preparation for the afternoon’s Cottage Meeting and the evening’s debate.

The election is only days away, but Milne and his team are composed. If there is anything to worry about, they are not letting on.

Milne and his volunteer coordinator Isaac Rule head out to State- and council-owned housing in the electorate. These are the houses most likely to have someone home during the day.

“Gates and dogs are hard to navigate,” he says. He will usually avoid houses with barking dogs, but makes a note to give that address a call later on.

He believes the ground game is the most crucial part of the campaign.

Milne has his routine down pat. He walks confidently to every house, knocks on the door and waits patiently.

If residents aren’t home, he leaves a hanger on the door handle and a pamphlet with his information as well as a hand-written note.

Those that are home can and will throw any question to him and he always has an answer. Can’t get to a voting booth? He’ll organise a ride. Don’t know who to vote for? Let him persuade you. Not interested? Not a problem, thanks for your time.

Milne carries electoral sign-up forms with him to make sure everyone is enrolled. He has already convinced two people to vote who weren’t going to, including an 80 year-old first-time voter.

About a hundred volunteers will hit the houses of his supporters again on election day to remind residents to vote. Milne can’t campaign himself so his car will remain in the driveway and his jacket in the closet.

In between the door knocking, Port Hills candidate Ruth Dyson calls. She warns him of some of the tricky questions that might be presented to him at that night’s debate.

Like many candidates, Milne’s campaign posters have been subject to vandalism. Twenty or more signs have been stolen.

But the vandalism isn’t always negative.

“Someone wrote ‘Tony’s the man’ on one of them,” Milne says.

After lunch Milne heads out to more State houses. Someone spies him from a neighbouring house and pretends they are not home when he comes to their front step. He knocks once and then leaves the pamphlets.

At another house the door opens. A woman stands there with a menacing-looking kitchen knife in her hand. Milne proceeds with his spiel anyway.

Milne thanks her for her time and carries on to the next house.

“By and large people are friendly and nice, even if they don’t support you,” he says.