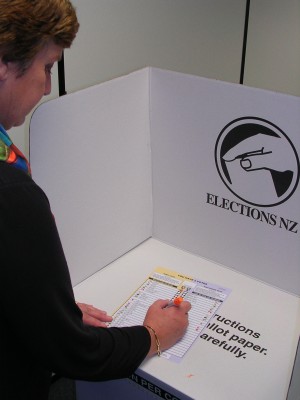 Exercising your vote: many Christchurch residents have yet to enrol.
Photo: Supplied.

Nine per cent of voters nationwide have yet to enrol, but in Canterbury the numbers are almost double that figure.

University of Canterbury political scientist Dr Bronwyn Hayward said Christchurch was witnessing the typical effect of a disaster: before the 2010 and 2011 earthquakes, the city had a high level of political engagement.

“The earthquakes have been unusual because the effects have been protracted over years,” she said.

“The disruption to daily life and the on-going effects for many has meant that Christchurch is still in a disaster event.”

The Record surveyed Christchurch people who are not enrolled and found various reasons for their non-enrolment. *

Brogan (19), in the Ilam electorate, thought the election was rigged.

“I honestly feel there are people above the government who want the country to run a certain way and what they think should happen in New Zealand will happen no matter who we vote for,” she said.

Maria (17), from Aranui, said she was unlikely to ever vote.

“It is just not important and I don’t understand it.  My friends are the same,” she said.

Matt (28) from the Ilam electorate said he had not enrolled because he had been swayed by British comedian Russell Brand’s comments.  Last year Brand said he had never voted and never will because he was exhausted by constant political lies.

Matt agreed: “I think the political system that we have is very broken and I do not want to encourage that any further.”

John (49), in the Christchurch City electorate was not enrolled because he did not think his private information would be kept safe.

“The electoral rolls are used for so many purposes apart from just voting and I don’t want that,” he said.

Many yet to enrol

Over 40,000 eligible voters in Canterbury are unregistered — almost as many as an entire electorate — and in keeping with the nationwide trend, almost half of those are under 30.

Nationwide, the number of people who remain un-enrolled has increased from seven per cent in 2011 to almost nine per cent as at 14 September.  That equates to almost 300,000 ineligible voters.

The registrar of electors for Christchurch Anthony Patterson said  the increasing rate of non-registration was a worldwide trend.

*Surnames have been omitted because it is an offence to not register for the general election.