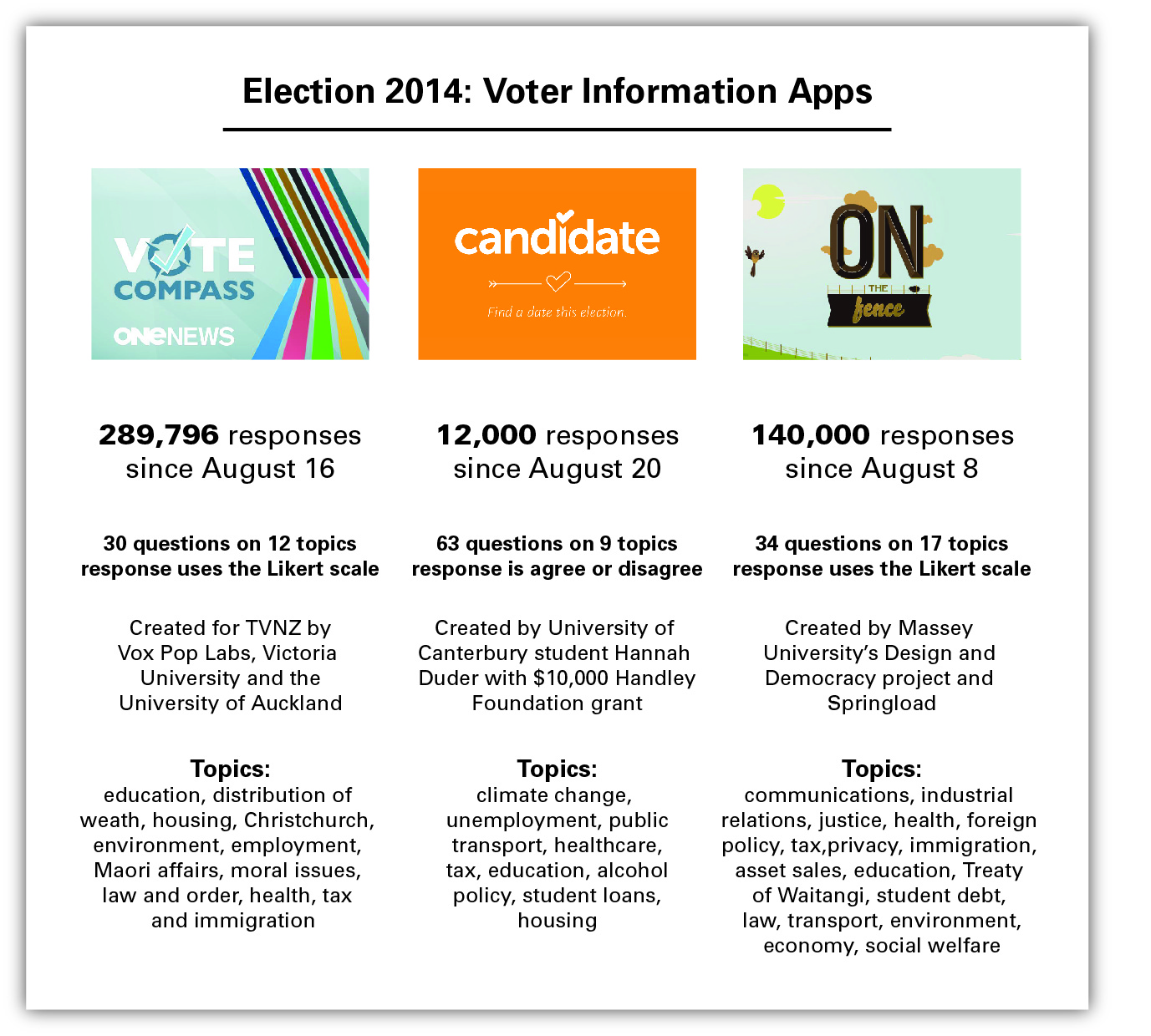 Less than 15 percent of those enrolled to vote have taken advantage of web-based voter information applications ahead of tomorrow’s election.

Websites such as Vote Compass, Candidate and On the Fence are designed to condense relevant political issues and give voters an indication of which party best represents their views.

Vote Compass, an application initially created for the 2011 Canadian federal election campaign, was redesigned for the New Zealand election by Toronto-based Vox Pop Labs for TVNZ. It has been the most widely used app with 289,796 responses as of September 19.

Unlike the other apps, Vote Compass asks about preferences for leaders and parties and provides a graph of how the user fits into the political landscape.

Massey University created On the Fence for the 2011 election and collaborated with web company Springload this year to create an improved version. Since its launch on August 8, it has had close to 140,000 users.

Lead designer for On the Fence Kieran Stowers said,  “judging by what we see on social media and people we have talked to we have seen this is really filling a gap”.

He said for some users, the app confirmed what they already thought but others were surprised by their responses. The app helped voters to make an informed decision by encouraging them to question the parties and their policies and look beyond personality.

Candidate was designed by University of Canterbury student Hannah Duder and is targeted specifically at young voters. It has had about 12,000 users since its August 20 launch and the results show a percentage alignment with parties.

Duder said the content for Candidate was supplied directly from the parties, which meant users were not getting the designers’ opinion, and “it’s not biased towards one party like many other resources out there”.

Political science senior lecturer at the University of Canterbury, Bronwyn Hayward said she while she understood the good intentions of voter info applications, she was concerned about how easily social media could affect people’s choices.

She said the ability to enter an individual opinion on a website and have an answer come back turned what made a very good society into a transaction.

“It undermines the fundamental premise of what it means to be democratic.”

She said the individualised approach of ‘what can a party give me?’ was at odds with working towards what was best for the wider community.

“While we think we are connecting more, it is more and more with people like us. It encourages a greater intolerance or a more extreme expression of views.”

Hayward said despite the rise of voter apps, it was important for people to discuss matters in order to form opinions and work together to create an idea of what we want a democracy to be.