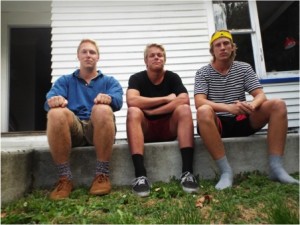 GUTTED: George Russon, left, and flatmates Thomas Gibbs and Thomas Parkes feel unnerved after a thief snuck in while they were sleeping. Photo: Georgina Campbell

Police have increased patrols in the area in response to the spike in burglaries.

He said while he was sleeping a man climbed through his bedroom window, snuck into the living room and took his iPhone and iPod.

The following night someone broke into the flat again. Russon confronted him in the living room and told him to “get out”.

“It was a bit unnerving,” he said. “Every night, even though it was like 30 degrees some of those days, I just kept my window shut because I didn’t trust myself to wake up if this fella came in again.”

Riccarton Constable Dave Brunton said students were targeted was because they tended to have a carefree attitude to security. They also owned the latest electrical goods, which fetched high resale prices.

“Often for students though it’s not the price of the laptop but what’s on it.,” he said.

Masters student Connor Rennie said a man rummaged around his flat two weeks ago and stole a pair of Ray-Ban sunglasses.

History student Alice Bates said an unidentified woman had walked into her flat three times in the past week.

There was always someone home and while they had not been robbed it appeared the woman was trying to work out whether or not the house was vacant.

“If there are people sneaking around you kind of get paranoid about opening the door if you’re home alone.”

Police were unable to provide figures for the number of burglaries in the area.

_Georgina Campbell for the Western News