Ben Mack  spends an afternoon with Tony Aldridge to report on how one man’s data is helping to shape the rebirth of Christchurch’s hillside suburb of Mt Pleasant.

The sea breeze is strong as Tony Aldridge walks the ever-so-steep streets of Mt Pleasant.

“A nickname for Mt Pleasant is Mt Plywood,” he says as a seagull squawks overhead.

It seems an apt description. Dilapidated houses snake around a large hill. Some seem like they’re under construction. Others look like a bomb went off inside.

Clipboard in hand and wearing charcoal sweater and backpack, Aldridge writes a “D” on a sheet of paper and enters the address for a vacant lot that looks to be nothing more than a hole in the ground.

Aldridge has been walking the streets of Mt Pleasant every three months for the past three years, collecting information on the state of homes following the February 2011 earthquakes. Known as Mapping the Damage, the project is aided by his 22 years of work as a consultant for an aluminum smelter and background in statistics.

“I like numbers, collecting data, and doing something with the data,” he says.

“So when the earthquake came along, this suburb was badly damaged. And there were all sorts of rumours or hearsay or thoughts about how many were badly damaged. There were estimates like a third of our suburb [had been damaged] and it [was] going to take years [to recover]. No one really knew.”

Across the street, a house appears to be under construction because its front is covered with scaffolding. Aldridge writes “RB” for “rebuild” on his clipboard.

When the house is finished and people move in, Mt Pleasant Memorial Community Centre & Residents Association earthquake recovery coordinator Linda Rutland will visit to personally welcome them to the community. 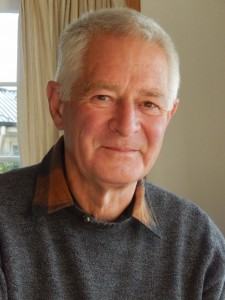 Tony Aldridge: he now lives in Kaikoura, but still returns to map his former neighbourhood.

The epicentre of the February 2011 earthquake was about a kilometre away from Mt Pleasant. While insurers have claimed the area should be back to its pre-quake state by 2017, Aldridge said it might not fully recover until 2025 or even 2030.

Aldridge himself was greatly affected by the quakes. Forced out of his Mt Pleasant home, he’s moved seven times since, and now lives in Blenheim due to high rents in Christchurch.

Yet Aldridge is back every three months, keeping track of the suburb’s recovery despite the four-hour drive from Marlborough. It used to take him about a week to visit every lot. Now he does it in around three days.

“That’s what keeps me collecting data. It’s people’s lives, all this.”

Later on, Aldridge meets a bald man in a four-wheel-drive vehicle in front of a house that looks to have been repaired already. That’s exactly what the case is, with the man saying he’s been in the house for a few months.

Aldridge says the positive reception he’s received from residents helps give him energy to continue the project.

“Most people are really supportive.”

He says only three people have told him to go away.

Close friend and former neighbour Glen Metcalf says Aldridge is a “kindred spirit” who is helping tell the story of Mt Pleasant through his work.

“So many people you talk to aren’t settled yet. It’s been nearly five years.” 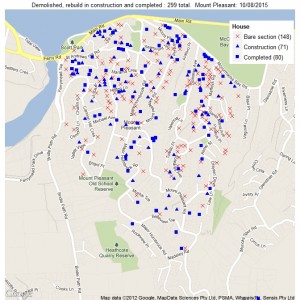 Mapped: houses that have been demolished, rebuilt or that are still under construction.

‘Getting good data is hard work’

It may be longer before people are settled again.

According to Aldridge’s most recent survey in August, 322 houses in Mt Pleasant have been demolished. A total of 81 homes are classified as being repaired, with a further 71 at the rebuild stage. Eighty houses have been entirely rebuilt.

Aldridge says the “intense” phase of his work will likely last until 2017. He says he’ll continue to send the data he collects to Linda Rutland, who publishes the results online and in a newsletter known as the Mt Pleasant News.

“I’m not going to stop now. You can’t take shortcuts. Getting good data is hard work.”

The street and surrounding hillside are bathed in golden light as the sun begins to set. Aldridge will be back out on the streets the next day to continue his latest survey. The data he collects, he explains, can help answer important questions not only about Mt Pleasant, but all of New Zealand.

“Questions like ‘how long does it take a suburb to recover after an earthquake?’ [can be answered with my data],” he says.

But as temperatures drop, Aldridge says it’s time to call it a day. The reason?

“You can’t get good data when you’re cold.”