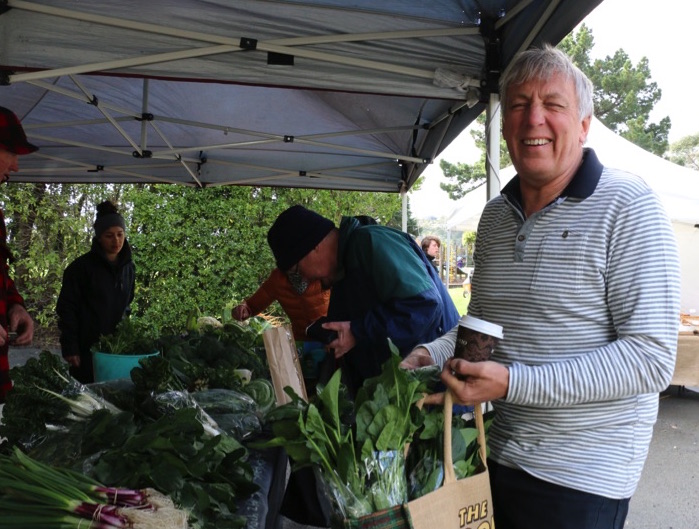 Tom Davies at the Mt Pleasant Farmers Market, which he first set up four years ago. PHOTOS: Monique Steele.

For the residents of Mt Pleasant, community spirit and resilience have been imperative post-quake. One man helped bring the community together, when the only people locals could turn to were their neighbours. Monique Steele reports.

With supermarkets closed and the suburb of Mt Pleasant in turmoil after the quake, Tom Davies knew he had to act.

Davies’ response was to set up a farmers’ market where people could buy food and share their experiences.

The first Mt Pleasant Farmers’ Market was held at McCormacks Bay Road on March 5, 2011, only 15 days after the devastating February 2011 earthquake.

“I remember standing back and watching people hugging and kissing and talking. It’s actually really emotional thinking about what happened that day. It’s only in hindsight that you realise it was quite important,” says Davies, reflecting on the first market.

Mt Pleasant experienced severe damage in the quake. It left many residents with damaged homes and without basic services. 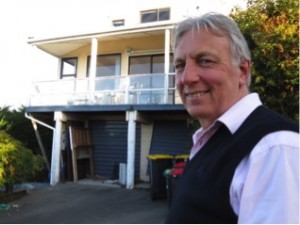 Tom Davies lived in his damaged Mt Pleasant home for three years before it was repaired by EQC. PHOTO: Monique Steele

Local resident and industrial statistician Tony Aldridge created a database of 1640 Mt Pleasant houses in October, 2012, to assess damage in the area. By August, 2015, 322 houses had been demolished (80 rebuilt, 71 in construction). At least 600 houses had repairs completed and 81 houses had repairs underway in Mt Pleasant.

With locals struggling to buy food and all the supermarkets in the area closed, Davies, a Linwood College teacher, began to organise food for the community. This venture would change his life.

He established the Farmers’ Market in a parking lot near the old Mt Pleasant Memorial Community Hall, as roads were blocked and streets were covered in liquefaction.

“It was a bringing together of producers and consumers. But I didn’t look at it like that initially. I looked at it as pure and simple as we need to get food for the people. That was my priority.”

“All I did was make a few phone calls to make it happen, really. It was a typical teacher thing to do really – what do we need, how do we do it, bang bang bang, it’s done. I didn’t think of it being very special, but obviously a lot of people consider it to be very special,” he says.

He contacted suppliers and organised signs to go around the neighbourhood advertising a market to provide fresh fruit, vegetables, bread, meat and eggs.

Stall holders set up their free coffee, young buskers came to play for the people, fruit, vegetable and meat stalls were set up, and the organisers prepared for around one hundred people to turn up.

“All of a sudden these people started arriving and it was just amazing to see hundreds, thousands of people suddenly arrive,” Davies says.

Offers of freebies came tumbling in; one man offered a whole cart of free apples and another free coffee.

“There was this huge outpouring of community action and community support. People’s generosity was just phenomenal,” Davies says.

“We were providing it for a week, possibly two, just to make sure the local people had food. I was still expecting at that stage that things would get – stupid, really – but to get back to some sort of normality. See, we still expected these other places to open.

“We were just an empty car park filling it up with produce and filling it up with customers. It was just a short term thing, I never expected it to go on for any length of time. But it obviously captivated an awful lot of people’s hearts and it became really established.” 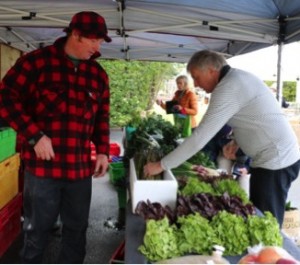 Stall owner Cam Booker, left, has been selling at the Mt Pleasant Farmers’ Market since day one and says it is his favourite market.

Davies says locals hugged and thanked him and the other people involved in the market and expected to return the following week. It has run every Saturday morning since.

“The real stories of hardship actually came from the traders, the people with the stalls, who were really worse off because they had no money.”

Fresh produce stall owner Cam Booker has been selling at the Mt Pleasant Farmers’ Market since day one and says it is his favourite market.

“It’s been good. This market is different to all the others. It’s little compared to the Lyttelton Market, but it’s the locals’ market,” says Booker.

Davies says the market gives people not only access to fresh food but an opportunity to socialise.

“It was very important to get people out of their houses and to share ….. and actually to be together, that collective spirit,” he says.

A place for the community to gather

The Farmers’ Market has given Mt Pleasant a focal point which it didn’t have before.

Derek McCullough, president of the Mt Pleasant Residents’ Association says the earthquake brought the community together and “the market is an illustration of that.”

“Tom’s a colourful character, and the market is his baby,” McCullough says.

Davies pays a tribute to the people: “I think the people here are fantastic, I knew a lot of people in the UK, but God I know so many people here, it’s unreal. I can’t go anywhere without knowing someone, I know that obviously I do a lot and a lot of people know me that way”, he says.

“My circle of friends is huge; it’s all of the community, plus the market traders and their families as well. So during that time we’ve seen births, deaths, marriages, breakups. We’ve seen it all, and I’m the biggest ‘agony aunt’ there is. They all come to me for help.”

Davies’ work in the community was recognised in 2012, when he won a Christchurch Earthquake Service Award, a year after the February earthquake.

“I feel immensely proud of it, but to me, providing food for local people is just a humanitarian thing to do. I sure as hell didn’t do it for any awards or thanks. I did it because I knew that people needed food… I’m very humbled by it, I know it means an awful lot to a lot of people.”