Avebury House is at the heart of Richmond’s rich history and its community spirit. Kaysha Brownlie visits the heritage home to check out how it is rebuilding itself as a valued community facility. 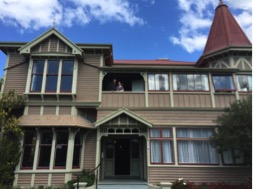 Nestled amongst trees in the cul-de-sac of Evelyn Couzins Avenue, the Victorian style building was once the only building standing in the Christchurch suburb of Richmond.

First built in 1851 as a swanky residence, Avebury House has since served its community in one way or another — it has been a youth hostel, a caretaker’s headquarters and a venue for steam train exhibitions, weddings and more.

Richmond was one of the hardest hit areas during the 2011 Christchurch earthquakes and Avebury House was lucky to remain standing. Now owned by the Christchurch City Council, it was strengthened and restored to its Victorian and Edwardian colours, and reopened in 2014.

Administrator Trish Spooner says the house was bustling with people before the earthquakes, but it was different now.

“It’s slowly getting better. We are booking out with weddings, which is good.”

The land on which Avebury House sits was first owned by Dr John Seager Gundry. Later, four generations of the Flesher family lived in the grand house.

Kathy Wilson says her father was the last Flesher to live there, leaving when he was five years-old.

“We don’t have any involvement with the house now, but we do get invited to the odd thing.

“It’s the sort of thing I can take my two boys down to and show them.”

England-born Christchurch architect James Glanville designed the Victorian home and although the building has been altered many times, it was restored to its original state according to heritage guidelines.

Christchurch residents Ruth McClintock, 27, and Sean Holmes, 31, are planning their wedding at Avebury House and say they fell in love with it straight away.

“I actually grew up around this area so it’s nice to come here to have my wedding,” McClintock says.

Spooner, who has been working at the house for just over a year, says the place really grows on you: “You become very protective.”

Many community groups have begun at Avebury House. Olga Whittaker says she could not have started the quilting group Hugs All Round had it not been for the affordable space at the heritage home.

An elderly gentle exercise group also uses the building, as does the Garden City Orchestra, which will have its 10th annual Christmas concert at Avebury House this December.

Although the building has been restored, Avebury House has yet to recover its place in the Richmond community post-quakes. Spooner is hoping an annual gala, beginning next February, will bring people back.