Music man Al Park is more than happy to mentor up-and-coming musicians in his community. Eliza Ballantyne talks to the man who lends a helping hand to the talent pool in Lyttelton.

You may know him from his Christchurch band, Louie and the Hotsticks.

Park has lived in Lyttelton for almost 40 years. In a short walk down the township’s main street, he is stopped at least four times by locals. All of them know him by his first name.

These days, Park spends a lot of his time mentoring aspiring musicians. He says he’s “always been a bit of a mentoring kind of guy”.

It helps him give back some of the knowledge he has developed over decades in the music business.

Park says he has lived a great music life but reckons even he would have benefited from having someone say, “just do it”.  That drives him to foster new and emerging talent wherever he can.

On Wednesdays, he can be found at Lyttelton landmark the Wunderbar, “jamming and having a good time” with his “boys”  as they work on new material and techniques.

The Wunderbar is a fitting venue for Park’s masterclasses. He has tried several times to buy the local watering hole. When the last attempt failed, he looked through the tunnel and bought a bar on Dundas Street, in central Christchurch. 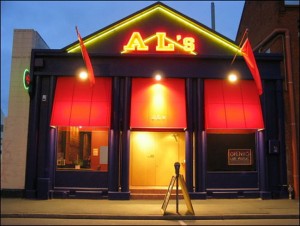 Al’s Bar became a magnet for local, national and international acts and a popular location for musos and music lovers alike.

The singer and guitarist believes the bar was popular because he took a care-free attitude towards running it. “There were no bouncers, I was the bouncer.”

During his managing days he made a point of being at the bar every night: “You cannot have Al’s Bar without Al.”

Unfortunately, like so many other businesses in Christchurch, the February 2011 earthquakes forced Al’s Bar to close its doors. Park says it was “heart breaking” to let it go but he’s not interested in starting again.

“It’s like a relationship; you have good reasons, when it is over, not to go back.”

His bar managing days may be over but his presence in the Christchurch music scene is far from finished.

Adam Hattaway, for one, is grateful to Park for all he is doing for him and his music.

From a young age Hattaway has been passionate about music, particularly singing and playing guitar. His parents introduced him to Park and for years they stayed on each other’s music radars.

When Park put a call out this year for a guitarist, Hattaway jumped at the opportunity.

“He always has excitement and enthusiasm,” Hattaway says. “He’s not negative but he’s able to tell me where I’m lacking.”

It’d be a lot of work for anyone, but Park, 65, shows no signs of slowing down. He’s happy to live his own “little rock and roll dream”.