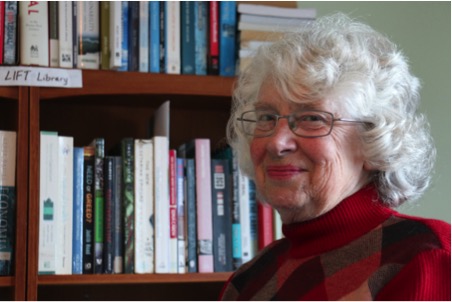 No time like the present: Juliet Adams. PHOTO: Oliver Lewis.

In 2011 she lost her job and suffered a stroke, but instead of stopping her it set in motion a chain of events that made Juliet Adams want to make the world a better place, one book at a time. Oliver Lewis reports.

Fingers extending, Juliet Adams begins counting off the groups she is involved with.

The 74-year-old is sitting in the living room of her Lyttelton house. She’s just picked her grandson up from kindergarten and later on there is a meeting with 350, a climate change organisation she shows films for.

Floor-to-ceiling windows offer commanding views over the harbour, a place Juliet has come to love since she moved here in 2007. Beside them sit two bookcases, one of which has a hand drawn sign saying LIFT library.

“It stands for Living Economies, Inspiration, Facts and Transition,” she says.

The library is a Project Lyttelton service Juliet runs to educate people about issues like sustainability, money and politics. Each Saturday she takes a trolley bag full of books down to the Lyttelton Farmers Market and encourages people to sign up. For a $20 subscription they can hire any of the books or films that have been donated or which Juliet has bought for the library herself.

She also writes a weekly newsletter for the 130-odd members, where she describes any new additions and provides information on upcoming events.

“That’s what I see as my purpose,” she says, “I’m a facilitator of information.”

Being a teacher is nothing new to Juliet. She used to teach English in Japan and China before moving back to New Zealand in 2007 when her daughter, Jenny Garing, started a deli in Lyttelton called Ground.

What is new is the activism and community spirit that have fired her up and left her feeling like she, too, can be a mover and shaker.

“I’ve got more energy now than I did two or three years ago,” she says, energy she attributes to working with the people in Project Lyttelton, Margaret Jefferies, who started the Lyttelton Timebank, Garry Moore, and Gen de Spa, organiser of the anti-TPPA movement in Christchurch.

These people inspired her, but three things needed to happen before Juliet found the time and the motivation to become engaged herself.

In 2011 the earthquakes destroyed Ground, where she had been working seven days a week; she joined the Lyttelton Timebank; and then, only a few weeks after joining, she had a stroke.

“I had no strength,” she says, “basically I was just sitting, even walking up the stairs from the bedroom was a struggle.”

For a woman who hates being idle, it was enormously frustrating.

The stroke left her unable to earn the Timebank hours she needed to get help driving to the doctor. So, in an act of generosity, Margaret Jefferies told Juliet she could contribute to the Timebank by reading and summarising a book about the origins of the movement: No More Throw-Away People by Edgar S. Cahn. 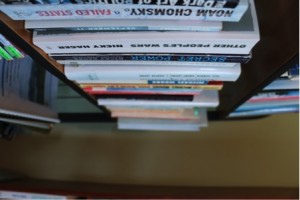 “It changed my life,” Juliet says.

Beforehand, Juliet – who describes herself as reserved – was never involved in the community; she had never engaged with the kinds of ideas she found herself reading about.

“It was a whole new world for her,” Jefferies says, and she seized upon it immediately.

Jefferies was the person who inspired Juliet to start the LIFT library.
Four years ago, during a national Timebanking Hui, Living Economies founding member Helen Dew ended up staying with Juliet. They got talking, and Dew happened to mention a library she had started.

During the Hui, Jefferies and Dew talked about how great it would be if Lyttelton had something similar and Juliet, who had worked as a librarian in the past, seemed like the natural candidate to run it.

Within a couple of months, the first instalment of books had been sent down from Carterton. Since then, Juliet has been a regular fixture at the Lyttelton Market and a presence across so many groups in the city that, counting them on her fingers, she loses track.

“That level of energy, it’s impressive, for anyone of any age,” de Spa says.

When told that Juliet considers her an inspiration, she goes quiet on the phone. “Wow,” she says, “it’s humbling to hear that, but believe me: we belong to a mutual appreciation society.”

The people who inspired her then, have in turn become inspired by Juliet, the 74-year-old whose striking energy and passion are benefiting both Lyttelton and the wider community through the education she offers to “make the world a better place.”

Looking up at the ceiling she stops and apologises, “I’ve noticed some cobwebs,” she says, “but I think other things are more important.”