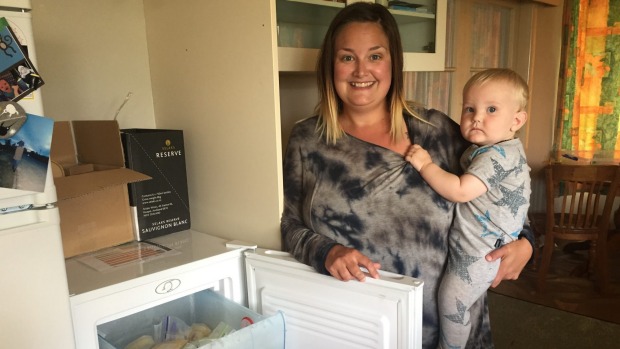 A forward thinking mother and a collective of midwives have opened a breast milk donor bank in Rangiora.

North Canterbury Milk is the brainchild of Natalie Gillespie and midwives Gill Smith and Jackie Snowden.

The non-profit breast milk donation scheme collected breast milk from women who expressed excess milk after pregnancy and distributed it to local babies.

“Some women for no apparent reason just don’t produce enough milk, while others have medical conditions; some have had a breast reduction or have polycystic ovary syndrome,” Smith said.

The Ministry of Health recommends that babies are exclusively breastfed until aged six months.

“Formula is OK but it’s not as good as breast milk, so if they can access breast milk from another source, that is going to be a lot more beneficial for the baby”, Smith said.

Potential milk donors would undergo extensive blood screening and review of their medical history before being allowed to donate. The breast milk was pumped into sterile containers for storage.

Within three days of opening for donation, they had screened 10 women, had three women donate and three women collect donated milk.

The Neonatal Intensive Care Unit (NICU) at Christchurch Hospital had a breast milk donor bank, however to be eligible for donated milk a newborn must be admitted to the unit or meet a strict criteria.

Gillespie produced excess milk following her second pregnancy and midwife Jackie Snowden distributed this to clients at her practice who were experiencing issues breast feeding.

Gillespie has since donated short term to around 20 local families.

A local mother to whom Gillespie donated last year said it was the most wonderful gift someone could give.

“The need is there, it’s just getting it to the point that it’s quite normal, quite natural and easy to ask for,” Gillespie said.

It could be extremely frustrating and upsetting for mothers, Gillespie said, to sit on a pump for hours and not produce any milk, especially when they were already under so much stress with a newborn.

The milk was being stored in a freezer at Gillespie’s home which she noted “wasn’t ideal”, while she had also been lending out her own breast pumps and equipment to donors.

The women were seeking sponsorship and equipment donations but said the key was really getting the word out.

“We are here, ready and waiting and if you have milk for us, we will take it.” Gillespie said.

_Charlotte Carter for The Press